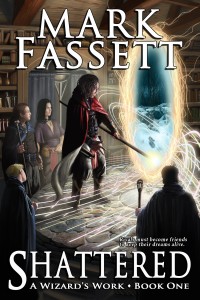 I just watched a video of Amanda Palmer speaking. Again, like her commencement address and her TED talk, it’s a powerful, unique speech. She think deeper about art than I ever have, but at times, the way she talks about it nearly makes me tear up. I feel like an idiot.

Am I making art when I write? Certainly. Good art? I can’t answer that. I write what comes to me. I don’t construct it. I try to tell the stories I have inside me while trying to avoid rehashing my influences. Do I succeed? I think so, but I do not know for sure.

All this week (through the 31st of May), Shattered is on sale for $2.99 as part of a group promotion with a lot of other awesome fantasy works. Pick up Shattered on the cheap and get it read before Fragments comes out in early June (I’m aiming for the 6th, but with the vagaries of the US Postal Service and the speed of bits on the internet at the various retailers, it might be an extra day or two).

To the right, you can probably see that I’ve added a couple new projects. One is a storyline sequel to Zombies Ate My Mom, and the other is a sort of fairy tale fantasy romance in the same vein as The Sacrifice of Mendleson Moony.

The plan is to finish the first draft of both of these this month, but if you know me, plans are meant to be ignored. I’m concerned that ZAMM 2 will go over my projected word count, and if that happens, it won’t get done. They’ll both get done eventually (this month or next), but getting them both done this month will be a challenge considering I still have to do edits on Fragments this month.

It’s going to be a busy month.

Oh, did I mention, I’m working on StoryBox 2, too?

I’ve made some changes to the site in anticipation of the release of Questioner’s Shadow, the first book in the Lords of Genova series.

What?! Another series?! Why don’t you finish A Wizard’s Work, first?!

That was my original plan. But if you know me at all, plans never work out the way I want them to. Here’s what happened.

However, I needed something to work on at a workshop I had registered to attend. I spent weeks trying different things. First, it was a space opera type story (that I will write someday, it just wasn’t the time for it). Then, I came up with a story that I’m planning on writing, but I needed to do a lot of research to even get it off the ground, and I just didn’t have time.

One night, with about four weeks to go, I challenged myself to write the most provocative first sentence I could. I was pretty happy with it, but it didn’t have a story.

And then, with about a week and a half to go, I realized I could put that first line together with this other story idea of mixing Jack the Ripper and Beowulf together, and that’s what ultimately kicked off Questioner’s Shadow.

At this time, Questioner’s Shadow was only a single story, and I was really excited to write it. However, as I started to get into the first scene, and started to learn about my main character, I discovered that he was in real trouble that extended beyond the arc of this single story.

Thus, I ended up starting another series before Shattered had even seen the light of day.