I’ve been working through some mental bullshit. Some of you know that. I may or may not have been clear about it on the blog in the past. It is what it is.

Artistic work, being what it is, relies on being able to clear away that mental bullshit (or harness it) for that time period in which you’re creating. You have to be able to lose yourself in what you’re doing, especially if you’re writing. If you can’t lose yourself in the story your creating, and you allow your real life to intrude, it becomes harder and harder to make progress.

These are my word counts for the past six years. Read ’em and weep.

Can you guess what happened? The voice of a person close to me took up residence in my head, and once it was there, I couldn’t get it out. Fear made the voice stronger and stronger until it choked me.

This person never intended this to happen to me. They never actually said the things that echoed within the confines of my skull. But I let them in, magnified them, and they became my own personal writing hell to the point where I was wondering if I was a writer anymore, or even if I wanted to be.

I’ve been on the cusp of solving this problem for a couple months, now. I could feel it. It was palpable. I just didn’t know exactly when.

Until this past Monday.

An event occurred, something that was a bit stressful, but generally not earth shattering. I’m keeping the details private, because the person involved may not want them public, but it set things in motion inside me. It was the push I needed.

The unwanted voice in my head that I couldn’t get rid of? It’s gone. The fear and stress associated with it? Gone. I wrote 1100 words on Tuesday, 2600 words on Wednesday, 3200 words on Thursday, 3100 words on Friday, and 1400 words on a fairly hectic Saturday. More than eleven thousand words this week. Compare that to all of 2018. The 3200 words on Thursday? They were the most words I’d written in a single day in three and a half years, and I’m looking forward to tomorrow’s writing.

All because I was able to exorcise a voice from my head that I’d magnified into a mammoth, frightening demon that was sucking the life out of me.

Now, story time is over. On to the part of this post that sort of resembles the title.

I’m working on a new fantasy series, tentatively titled Sorcerer’s Bane. The first book is done (it was done over a year ago). The second book will hit the half-way mark on Monday or Tuesday, and there will be at least three more after that. The release date of the first book is tentatively scheduled for the end of April. Pre-orders for the other titles in the series may become available at that time, but the plans for that are subject to change.

Following Sorcerer’s Bane, I’ll be writing a few more Grim Repo novels. These will likely be about 20% longer than Parted Out, and like Sorcerer’s Bane, will come out one after the other until the story arc is finished.

And then, following the Grim Repo books, I’m finally going to finish A Wizard’s Work. The reason I’m putting off until later is that both the Sorcerer’s Bane books and the Grim Repo books are much shorter than the AWW books will be, and I want to be sure I’m in a good writing rhythm before tackling them.

I may sprinkle in some other short projects here and there, but for the most part I will be focusing on these three series for the next year to year and a half.

If it sounds like a lot, it is a lot. It sounds daunting, to be honest, when I write it all out, but like they say, you eat an elephant one bite at a time.

And you write series one book at a time. I’m going to have one hell of a good time. 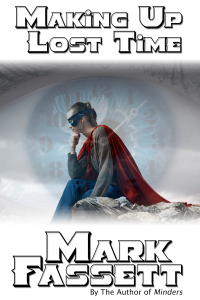 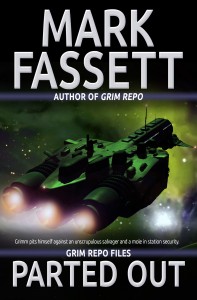 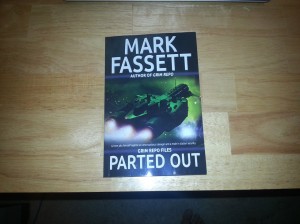 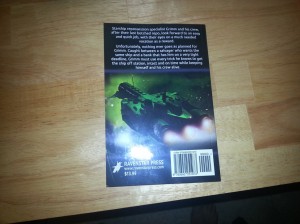 This morning, quite unexpectedly, October came to an end. I’d felt like I had started moving toward an ending a few days ago, but I didn’t think I’d stumble over it quite this soon. I would have said, when I woke up this morning, that there were at least a couple days left.

But in my second session today, things wrapped themselves up in ways I hadn’t expected, and I found myself with no more story to write.

October is, I think, a much more subtle story than I’ve written previously. It certainly isn’t like anything else I’ve done. It’s going to sit for a couple weeks before I get down to reading it and learning just what I’ve perpetrated on the world. I’ll probably let it go until just after I release Minders. It’ll be released at the end of September, just in time for you to read it in… October.

Coming up, next, though, is Minders. This bio-tech thriller/superhero origin story will be out Thursday, May 29th in most online stores. I’ve ordered what should be the last of proof copies, and if it’s in good shape, which I expect it to be, I’ll be spending Memorial Day weekend uploading it everywhere.

There’s one more thing. Parted Out: Grim Repo Files #2 has a release date, too. July 29, 2014. I’m really excited to get these books out, finally. It’s been a long, hard year, but things are finally coming together.

Tomorrow morning, I pick up where I left off on Bloodweave. I’m excited about it, too. I can’t wait to learn what Robert, Angela, Gerard, Nina, and Demetrius are going to do.

In the last post, I made some predictions about time frames and other things, and I was wrong on pretty much all of them. Minders din’t come out before Christmas, I didn’t really get back to writing as soon as I thought I would, and Grim Repo 2 is still sitting on my hard drive.

But that’s all old news.

We’re still dealing with some issues (who isn’t), but things have now progressed to the point that I’ve been able to write regularly again. Fourteen out of the last sixteen days, in fact. I can finally get out of my head and into my characters heads, and it feels really good.

This weekend, I’m formatting Minders for paper. It’ll be released at the end of May. It is, I think, one of the most exciting books I’ve written, to date. Usually, by this time in the process, I can’t stand to read my book again. This time, I’m looking forward to having to do the proofread.

Grim 2 is slated for a late July release. The book October (which I’m writing right now), is due out at the end of September. If I have time, I’ll slip in a couple of the stories that I’ve got sitting around.

I’d like to get these things out faster, but I’m not writing full time. Getting us on a firm financial footing takes precedence, right now, but I’m back on track and pushing ahead.

And as soon as I’m done writing October, I’m going to pick up Bloodweave again and get it out to you as soon as I possibly can.