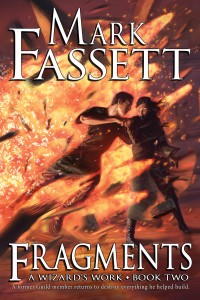 After what seems like forever (and a thousand delays), I’m excited to finally announce that Fragments is finished and available for you to read. It’s available in most of the major electronic bookstores except for Apple and Sony, but they should be coming along in the next few days to a week, I expect. The print version is currently available from me, directly, and from Amazon.com. It will filter out among the other retailers over the course of the next couple of weeks as the distributors get ahold of it.

I’m pretty excited about it. It’s nearly thirty percent longer than Shattered, and I can’t wait to hear what everyone thinks about it. 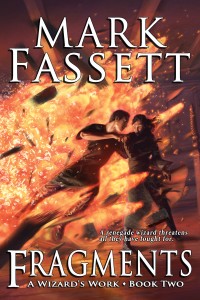 There’s nothing like finding a major continuity problem in a book with only two weeks left before you plan to release it. Stress levels go up, the day’s planned writing output goes down.

While writing Reworked, yesterday, not twenty words in I wrote a sentence that exposed a problem that I had created in Fragments. A goodly number of conversations mentioned this particular issue in exactly the wrong way. It involved something happening in Gerard’s past that would have invalidated the way he behaved in Shattered, and that’s about as much as I can say without spoilering parts of two books.

Once I realized this problem existed, I couldn’t write anything more until I found all the places where this set of events was mentioned and created a plan to fix them. One scene will require a complete rewrite, and there are a few other places that will need minor edits. It will probably add a couple days to my planned publication date because I’ll have to get the scene looked at by at least one other third party before I can call it good.

I’m annoyed, to say the least, but it’s better than catching it after I’ve already published the book.

I’ve been waiting for a long time to show this off. It’s another amazing Joe Slucher piece. He somehow manages to figure out exactly what I’m looking for, even when I’m not sure what it is that I’m looking for.

I’ve had the art since January. I wanted to wait until I finished the initial edit, which would mean that there’s a finite amount of time left before I publish the book. The book is with my beta readers right now (an intrepid bunch). When it comes back from them, there’s another edit pass (to incorporate their comments), and then the process of publishing.

I know some of you have been waiting a long time for this book, and I can’t wait for you to read it.

Anyway, props to Joe. I hope the book lives up to the cover.

It’s actually a Grim AND Fragments progress report, but I thought the title was more amusing without the AND.

Off to the right, you’ll notice that Grim Repo 2 looks like it’s done, with more words than the target. It’s not done. It’s on the border of being done, and I can see the other side, but there’s a minefield between here and there that I have to cross, first.

The Fragments edit is coming along. I have five chapters left to do, and I should be able to get them done tomorrow, barring any unforeseen circumstances. It’s taken so long, because I had to do some major edits early on in the book. Several people had to be written out. It was horrible. Don’t worry. You don’t know any of them, and they’re all mostly alive, I think

Another factor in the delay is that it’s nearly 25% longer than Shattered. I’ve hadn’t written anything as long as Shattered since Shattered, and I forgot how long it takes to edit something this long. I’m anticipating that Reworked (the third A Wizard’s Work book) will be longer, still, and I’ll have to adjust my schedule to account for it.

As soon as I’m done with the Fragments edit, I’ll reward myself by doing something I’ve wanted to do for awhile. I’ll show you all the cover (again, done by Joe Slucher). I think it’s fantastic, and I’ve wanted to show it off for a long time.