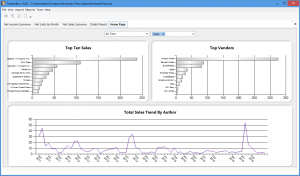 September turned out all right, I guess. It was actually kind of a difficult month, as I managed to run into a curb with one of our cars, and it’s been out of commission because we can’t currently afford to get it fixed. It meant that all of the events my son needs to go to require a lot of planning to make happen (as well as help from some of his friends on occasion).

I did get that TrackerBox update out, but I couldn’t make the Mac TrackerBox Kickstarter happen. I’m hoping to submit it for approval tomorrow, though (they say it takes three days). If it all works out, it should be up and going early next week. I’ll do a bunch of tweets and facebook posts surrounding it, as well as a post here, so don’t worry that you’ll miss it.

I’ve added features for the next big StoryBox update. The wordcount calendar is now in a real calendar, and the word usage data is now in a sortable grid. I’ve added a Bookshelf feature that can show all of your stories from all of your projects in a single view with cover thumbnails and status info. I’m in the middle of adding custom document properties for each document. For Characters, Items, and Locations, these will allow you to replace the text document Q&A with a set of fields that you can fill in. Some of these fields will let you draw links between documents or characters (think friends, family, etc….). I don’t have a target date for the next StoryBox release, but I can say that it is probably a few months away, still.

On the writing front, I finished up a superhero novella for an anthology/bundle I’ve been invited to. If I didn’t miss the mark, that should be available in November. I immediately started working on the follow-up to it, which, if all goes well, will be available in December. When I finish that, I’m planning a third that should be ready in January. After that, more Grim Repo.

I’m really going to push to complete series over the next year and a half. I think one of the primary things holding me back is how wide I let my focus get. I wrote Shattered, then followed it up with Questioner’s Shadow (the first book in another series) instead of with Fragments. Then I wrote Moony, and maybe a couple other things before finally getting back to Fragments. And then I wrote more things.

Frankly, as a reader, I’d hate that.

So the plan is to tighten up the loop. I’ll finish this novella series, then finish up Grim Repo, then a Sword & Sorcery series I’ve started (and not yet published), and then I’ll tackle the remaining Wizard’s Work books. I’m getting excited just thinking about it. Big plans, big plans. However long they take me, they’ll get done, and in that order.

Paperback
I put the finishing touches on the Paperback multiplayer update a couple weeks ago, and it’s live on the Google Play store and the Apple App Store. It’s a fun word/card game designed by Tim Fowers, and I suggest you go spend the $4 and play it!

TrackerBox
TrackerBox will be getting its first new features in quite a while, tomorrow (assuming all goes well).

The first one isn’t all that exciting, but you’ll be able to print your data and your charts.

The second feature is one I’m much more excited about. Filter Sets. You’ll be able to save frequently used filter settings, and restore them by selecting them from a list. If you write in series, and you only want to see how that series is doing, you can go into the titles, select the titles from the series, type in the name of the series at the top of the filter panel, and then click the save button. The next time you select the series name from the box at the top, it will restore that set of titles.

Mac TrackerBox
The Kickstarter for the Mac version of TrackerBox will be starting within the next two weeks. I just need to make a video. A lot of things happened over the summer that forced me to delay the start of the Kickstarter (one of which was the need to finish up Paperback).

StoryBox
StoryBox will be getting an update, but I think the next update will be a very large update. It will be at least 2.1, if not 2.5 or 3.0. I haven’t decided yet, but I’ve got a list of seventeen new features I want to add. I don’t know when it will happen, other than it will happen after Mac TrackerBox, assuming that gets funded. If the Kickstarter fails, it’s possible this could get pushed up, but I might have to find a different bit of work to pay the bills. Still, I wanted to let you all know that I haven’t abandoned it. It will get love, too.