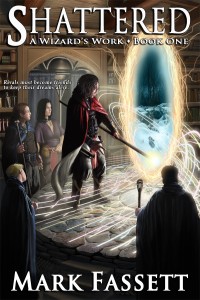 Shattered is now available at Amazon, Barnes & Noble, and Smashwords.

Four Apprentices
Robert remembers little of his life before Master Wizard Monteous Roarke rescued him and made Robert an apprentice wizard. Angela holds secrets about her life she fears to tell anyone, especially Robert. Gerard wants Angela for himself, and tires of finishing second. Wallace just wants to learn… everything.

A Work Gone Wrong
When an unknown assailant attacks Monteous as he steps through a portal, the portal collapses, cutting the apprentices off from their master.

A Desperate Search
The four must put differences aside and learn to work together to save Monteous, all while keeping his disappearance a secret.