I’ve been waiting for quite awhile to do this update. I was waiting on a promised change from the developer of the suite of controls I’m using to build StoryBox. It will hopefully fix quite a few outstanding issues, and perhaps should be faster (they keep talking about speed improvements).

They finally released the latest version earlier this month, and one thing I found is that the themes I’d been using had changed. I didn’t like them at all, especially the black, which had even less “black” in it that the current black theme.

The next update is all about integrating these controls and making the themes look the way I want them. There will be changes to every theme. It’s unavoidable. I hope you like the new ones better.

Here’s an early look at the “New Black” 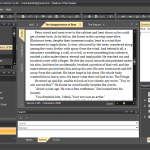 2 thoughts on “Updated Themes For StoryBox”