It’s all Zoe’s fault. The other day, I read this blog entry from Zoe Winters (an author of paranormal romance books) So You Think You Know Minimalist Decor? and I had to follow up on it. What the hell is “minimalism”? So I googled it up and found a bunch of blogs. The Minimalists, Becoming Minimalist, and mnmlist, among others. Color me intrigued.

Our house, if you’ve ever been in it, is not a hoarder house. You can walk through it, as long as you can avoid the toys that are inevitably strewn about the room. However, we’re still bogged down with stuff. Our garage has no room in it for anything. My office has more distractions than I can count, and my kids’ rooms have more toys than a typical toy store.

I would love to use the nuclear option on my house. Empty it of crap, and only put back what we really use. It’s not entirely realistic, though. I think Wendy (my wife) is willing to get rid of some stuff, but I don’t think she’s ready to get rid of things that she uses only rarely. I’m not entirely certain I’m ready to do that, either. So we decided that we would just take it a little bit at a time. The kids pick one toy a night that they want to donate. We’re going to work one bit of the house at a time each day, and eventually, we should reach our goal.

We started, yesterday, with a drawer in the kitchen that has been a source of annoyance since we’ve lived in this house. It’s really nice to be able to shut it without having to squish stuff down. I also put some of the more than 100 model railroad cars I collected up on eBay. I’ve wanted to build a model railroad in this house for years, but I never got around to it, and I may never get around to it, so to eBay they go. One other thing I did today was cleared out about four shelves full of books, which will be going to Half Price Books tomorrow. 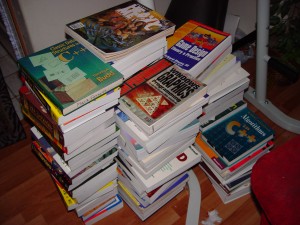 I don’t think we’ll ever be minimalists in the true sense of the word. I like my book, movie, and game collections. My wife has things she likes. So we’ve decided to eliminate all the other crap first and see where that leads us.