There are new mixes of Out Of My Mind and Confusion in the player on my Studio page.

Yes, yes I do have a Fat Head. A Cascade Fat Head ribbon microphone. Showed up at the door via the UPS man today. Can’t wait to try it out and see how it does on my guitars. From reviews I’ve read on it, it compares favorably to some other, much more expensive mics, and in many cases, beats them.

I am anxiously awaiting my wife’s return from work so that I can try it out tonight.

I bought the Orange Box for my 360 the other day (birthday money), and if you don’t know what that is, it’s basically a package of five games from Valve – three Half-Life games, and a couple other games, one of them called Portal.

If you haven’t heard of Portal, it has an interesting game mechanic in that you have a gun that can make a portal to another place. A portal is made when you place both sides. Imagine a piece of paper that you cut a hole through. From one side, you see a hole – one side of the hole. Turn it over, and you see the opposite hole. The gun will allow you to create one side of a hole, then go to some other place and create the other side of the hole, and it doesn’t have to be in the same surface. This is a portal.

The game is fun. It’s not terribly violent. There are some interesting puzzles and tricks that are possible because of the portal gun. I like the game a lot.

One of the complaints about it that I’ve heard from other people is that it is quite short. And, really, it is quite short, compared to other retail games you see. I played through it in about seven or eight hours. I wasn’t really counting, so I’m not quite sure. Part of the reason I wasn’t counting is because I was never ever bored. And the best part of it being short is that I was able to finish it, and discovered the really cool end credit song that I really like and never would have heard if the game was forty hours long.

And even if it’s the only game you play in the collection, where eight hours of entertainment at the movies would cost you at least $40, it’s very close to being worth buying the Orange Box for Portal alone, as long as you don’t mind short games.

One other thing about The Orange Box. I’ve heard Half-Life 2 is supposed to be a pretty good game, too 🙂

So, I just got word from Woodcraft that my Steel City drill press will likely be ANOTHER three weeks. I ordered and paid for this thing back in March. I also haven’t seen hide nor hair of the electrician, and I’m starting to get really frustrated. Yes, he was supposedly going to be doing us a bit of a favor, but it’s quickly getting to the point where using this guy will be detrimental to my ability to get guitars built sometime this year. 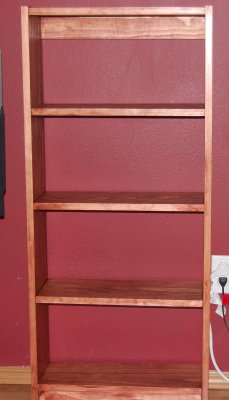 I started working, this weekend, on a small video game shelf, basically a DVD rack, for our living room, and everything was going pretty much the way I intended. Cut up the pieces, sanded ’em.

I went to put it together and realized that I can’t count. If you want 4 shelves, and you want the thing to have a top, you need to count to 5! Uggh. If I’d counted to 5, I wouldn’t have to go back to the store to get another piece of lumber, as I would have made each of the shelves half an inch shorter, thus making the last cutoff long enough for the fifth piece. Instead, I have to wait until I can get back to the store, which, hopefully, will be in the next half hour.