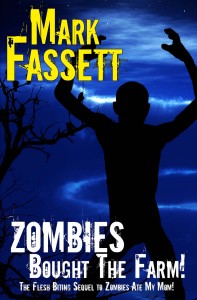 We didn’t have much ammo left for the big gun, a dozen rounds at most, but our visitors wouldn’t know that. The gun had been a lifesaver when Brad’s father used it and some quick thinking to extract me from the nightmare my apartment had become. Unfortunately, he had used up most of the rounds.
On our trip to the rural areas north of Seattle, we had conserved what we could. We weren’t likely to find any more ammo for the gun. We had stumbled across a couple of gun shops on our trip, but they had been stripped bare. The weapons we had were pretty much it, unless we could get back to Brad’s father’s place, or we got lucky and stumbled across an abandoned survivalist compound—where the word abandoned means the people turned into zombies and left, leaving their weapons behind.
Brad thought we might find one or two out here, but we had had no luck.
The sound of the motor grew louder.
I swiveled the gun around to point down the gravel encrusted driveway. I had a quarter mile of unobstructed view to the road, a two lane strip of pavement that wound along the base of a tree covered hill. That quarter mile would give me more than enough time to decide whether or not to open fire on our visitors, should they decide to turn down the driveway.
And I didn’t doubt they would at least think about it. They weren’t driving fast. They were looking for something.
The door to the house opened behind me, and feet rumbled on the porch. I chanced a peek and saw Sean and Brad and their weapons. Brad was still rubbing at his eyes with one hand, but carried a sword in the other. Despite my efforts to teach him, he was still useless with a gun. He hadn’t really mastered the sword, either, but he’d become proficient at dispatching zombies with it, and for the most part, that’s all that mattered.
It worried me. I would have preferred he take them out at a distance, but he couldn’t hit anything farther away than about ten feet.
He looked up at me and pursed his lips into a kiss.
God, I loved him. He was always thinking of me.
I just wished he could shoot.
The sound of the motor grew suddenly louder, and I spun back around. It wasn’t a car at all. A school bus, painted white and gray, emerged from behind a copse of trees beyond the cow pastures. Even from where I was, I could see that the windows were either painted or armored.
“Shit,” Brad said.
“What?” I asked, even though I felt the same way. A bus could be carrying a lot of people.
“It’s a prison bus,” he said.
“Damn,” I said. “Get off the porch. Where’s Danny?”
“I left him asleep,” Sean said.
“Go get him,” I said. Leaving Danny alone in the house during this confrontation was only a marginally worse idea than having him with us, but if we had to run, I wasn’t leaving him behind.
Brad jumped off the front porch to crouch behind the Humvee. Sean ran back inside.
I ducked down into the Humvee.
The last thing we needed was to have a bus full of ex-cons see us and think we were easy prey. We weren’t, but it would be better off if they didn’t see us at all. It made me wish we could hide the Humvee and its gun, but it was too late for that.
I found myself wishing Brad was in the Humvee with me. He could drive, I could shoot. We could take out that bus without a problem, if only we had fuel.
The shooting would draw zombies, though. Hell, the sound of that bus was likely to draw a few.
The bus slowed as it approached the turn to our driveway.
They were thinking about it.
They were probably looking for loot, and if that’s what they were looking for, we had it.
The bus came to a stop.
I opened a compartment behind the front seats and pulled out a pair of binoculars.
With the closer view, I could see that the bus was definitely armored with something, but there was no logo on the side. I couldn’t see very well through the door, as it was armored, too, but I saw well enough to see a shadow move inside. They were scoping us out, or at least, checking out the Humvee. They were probably looking for activity.
The bus rolled forward, and then it made a slow turn into our driveway.
Hiding had not been the answer.
I pushed myself back up into the sling for the gun and showed myself.
“Come out, Brad,” I said.
Now that they had rolled down our driveway, we needed to show them we weren’t to be fucked with.