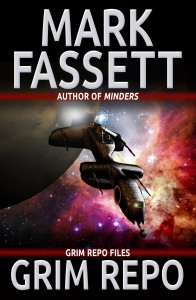 The first breath I took when I woke was free and easy. The second, even easier. But with the third, a globule of phlegm dislodged and I broke into a hacking cough.
“Whoa, whoa, he’s awake,” said Alice. “Help me sit him up.”
It felt good to hear her voice.
It didn’t feel quite as good to have two pairs of hands reach behind my shoulders and push me to sitting. It hurt like hell.
It did help the cough, though.
“That hurt,” I growled. More growl than normal. They must have only recently pulled the breathing tube.
“Sorry, Grimm,” said Alice.
I liked hearing her apologize. It didn’t happen very often.
“How long?” I asked.
“Three weeks.”
Damn. The bastard was probably three systems away by now.
“Why aren’t you after him?” I asked.
“Who says we aren’t?”
I opened my eyes, slowly. I had been putting that off, knowing that the bright lights of the hospital would hurt, and I wasn’t ready to deal with that, too.
We weren’t in a hospital, and someone had done me a favor and kept the lights low. Probably Alice.
It took me a moment, but when my eyes adjusted, I recognized the medic bay of the Grimm Repo.
“Thanks for getting me out of the cocoon. I don’t know how much longer I would have lasted in there.”
“By the amount of air left in the tanks, I think you had about thirteen minutes, give or take,” she said.
I didn’t bother to say thanks again. It wouldn’t matter to her.
I looked behind me. Mickey and his over-muscled physique stood, bulging arms crossed, almost.
“You cut me out?” I asked.
“No, Renaldo did. Alice had me searching for that asshole.”
“You find him?”
“Yeah. We’re about a day behind.”
“Where are we going?”
“Stantion.”
Holy shit. We’d been through eight systems already.
“He’s really running, isn’t he?”
“He’s not even stopping to refuel. He’s got to be running out soon.”
“Good,” I said, turning to look at her. Very good. I don’t know why he shot me out of the sky, but I don’t like it when people do that. “We get a kill order?”
“First thing.”
She’d probably applied for it before coming to look for me. Synths were always ‘job first’.
I made a note to ask her about it later.
“Can we get me out of here, then? I’d like to see what’s up.”
“Tests first,” Alice said.
Right.

I felt the transition to Stantion in my sleep. I always do. And it always wakes me up. This time, the slight wrenching feeling felt a lot stronger and made my bones ache. I put it down to my recent exploits with free-fall.
I waited to see if Renaldo or Eddy would call down to wake me up. That’s what I told myself. In truth, I had no desire to get out of bed until I was needed. Working my reconstructed muscles would probably help them heal, but lying in bed was much easier.
“Captain,” the call came through from Mickey, not Renaldo. “You’re needed on the bridge.”
Dammit. They called, and it wasn’t a wake-up call. What the hell had gone wrong, now?
I limped to the bridge as quick as I could. Three minutes wasn’t bad, considering the complete lack of exercise I’d had with my new muscles. I was out of energy by the time the hatch opened.
“Why the call?” I asked as I made my way to my chair.
In answer, several screens popped up on my desk. Two, at first glance, looked like empty space, but a closer look showed a debris field. Each screen had a different view. The remaining screens showed trace analysis, particle analysis, and whatever else Mickey thought I should see.
“What am I looking at, other than a debris field?”
“We think it’s Ehfrain’s ship. There are ID markers throughout. It’s still hot.”
Damn.
“Authorities?”
“No contact yet.”
“Where’s Alice?” She would know what to make of this disaster.
“She’s running a drone through the field.”
I looked away from the debris filled screens and tried making sense of the other data Mickey had sent to my screen.
The particle analysis didn’t show any sort of explosive residue or weapons fire, but there were some strange readings I hadn’t seen before.
“Eddy, I’m looking at the particle trace. What am I looking at?”
“I don’t know, Captain.” Everywhere else on my ship, I insisted on Grimm. But on the bridge, I insisted on Captain. “It looks very similar to the pretty explosion you survived.”
“And you don’t know what that is, yet?”
“It’s not in any of our databases, and the computer hasn’t come up with a composite match, either.”
I went back to studying the screens, and checked out the ship trace. There were several ship traces, which wasn’t surprising this close to a gate. But Mickey had highlighted two in particular.
One he’d marked as Ehfrain’s ship. It showed the path out of the gate, and the trace led straight into the debris field.
The second, he’d marked with a big question mark.
The trace originated near the debris field, and then led away. The origin had a time marker that coincided within twenty minutes of the arrival of Ehfrain.
But it didn’t have an entry trace, not from the gate, not from in-system. It just seemed to have appeared. Traces are visible for days.
“You’re quiet, Captain,” Mickey said. “You lookin’ at the ship trace?”
“Yeah.” I explained what I saw. “Did I miss anything?”
“Nope. What do you think, Captain?”
I think I wanted Alice up here with me, because what I thought scared me a lot more than I wanted to admit. I wanted her to tell me I was full of shit, but I didn’t think she would.
Still, I banged on the com. “Alice, to the bridge.”
“You can’t figure it out, Captain?”
I looked up from my desk, out across the bridge. Mickey had spun in his chair and was looking at me.
“No. I think I’ve got it figured out. I want her to tell me I’m wrong.”